Why You Should Avoid "A Small Orange" Web and Domain Hosting

Oct 18, 2016   Web Development   Nick Vogt   Comments (4)
Please note that this post is over a year old and may contain outdated information.
A Small Orange hosting was once the pinnacle of exceptional-quality web hosting. They had impeccable customer service and response times, great pricing and plans, and a wonderfully-designed website. Unfortunately, this is no longer the case. Here's why I now recommend avoiding A Small Orange, and what host you may want to consider instead.

I've used many web hosts over the last 14 years, including Superb, Dreamhost, GoDaddy, Yahoo Business, and Network Solutions. I switched my personal sites, including this one, over to A Small Orange hosting 4 years ago in 2012, and was extremely pleased for the first 3 years of that. I've used multiple tiers of their Shared and VPS plans, and have had several year-long subscriptions and upgrades on three separate accounts with them.

About a month ago I finally finished moving the last of my sites and domains away from A Small Orange. Their service, quality, and response times had gotten so bad that I could not risk using them any longer, and was frustrated at the lack of customer service.

Here are the things that have driven me away from A Small Orange. I've emailed them about each of these issues multiple times in the past, and have taken their surveys countless times. I earnestly tried to give them feedback on these issues, in hopes that they would fix them. Unfortunately, things only got worse and worse.

A Small Orange customer support took a drastic nose dive sometime in late 2015 or early 2016. Whereas before customer support would respond without 24 hours, it now usually takes anywhere from 5 to 10 days to get an initial response, and sometimes several weeks for a resolution on issues.

Domains Held Hostage
Last year (2015) I had over 10 domains registered with A Small Orange. I moved them, a few at a time, over to Google Domains, and just finished moving the last of them in September.

Prior to transferring a domain, you must remove its WHOIS privacy protection, which for A Small Orange requires opening a support case so they can remove it.

On three separate occasions, it took weeks to get resolution. One of my domains came concerningly close to expiration (less than 30 days) before I could get them to respond to my request to remove the privacy protection.

In February 2015, A Small Orange updated their website layout to a new responsive website. Since then they've gone through a few revisions of it, but have never gotten it right. It is incredibly buggy, both on desktop and mobile. I am convinced they have people working on it that simply don't know how to make a good website, or don't care to.

The old website (used from January 2012 to January 2015) was very solid and worked well. Despite being not responsive, it worked better on mobile owing to it being production-ready and mostly bug-free.

Responsive Site
Have a look at their current mobile site landing page: 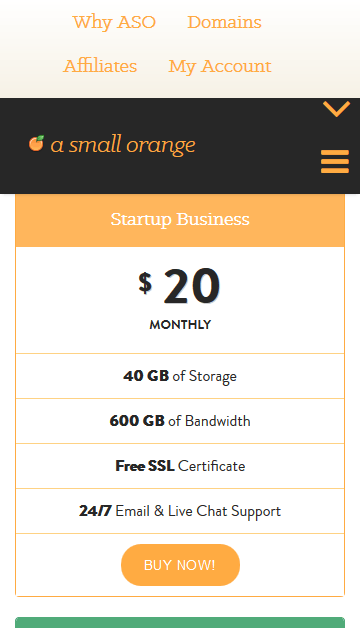 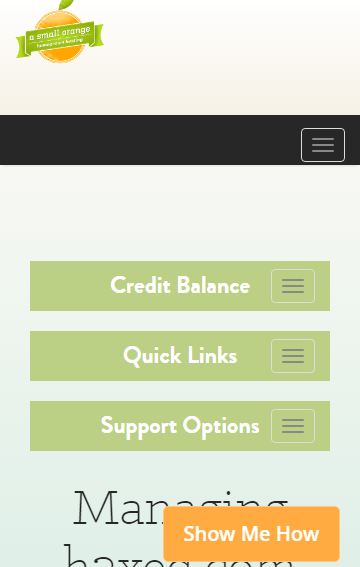 This is just downright awful. Bad spacing, bad menus, and bad icons. Why did they even bother with a mobile site? And it's been like this for over a year.

Desktop
The site has plenty of problems on desktop too. When editing a domain, there is no sub-nav. You have to navigate back to the domains listing page if you want to do more than one action on a domain.

Every time you log in, you have to click a separate checkbox saying you agree to their TOS. Every time. And if you mistype your password it erases the email field, making you retype your email as well.

Around the time that I started experiencing the bad support, their server downtime and outages started to increase. I don't have any hard data on this unfortunately, but I can say that the shared servers were more prone to this than the VPS.

The petyrbaelish shared server, which I had two small business sites on, was particularly prone to downtime. At least 4 times in the last year I had found my sites unresponsive, checked customers.asmallorange.com/serverstatus.php, and it was just petyrbaelish that was down.

The most likely reason for A Small Orange's decline is EIG, which purchased them in 2012 (and something I didn't learn about until a year ago). EIG is notorious for buying up successful/popular web hosting companies and causing their service and support to nose dive after a period of time. With A Small Orange it took a few years, but the inevitable happened.

It's difficult to trust any web host after going through this, not knowing who EIG might buy next. I decided to see what Amazon AWS was all about. I figured a company like Amazon isn't going to tank, and I probably wouldn't need to contact support ever thanks to how much documentation and information is out there.

Amazon AWS
I started out with Amazon Elastic Beanstalk, which is an abstraction layer that uses several Amazon services (EC2, RDS) in order to create a simple web host. Unfortunately, it's simplicity didn't suit my needs very well.

To make Amazon AWS work for me, I would have to create an EC2 Linux instance and configure the web host from scratch. Having worked with VPS Linux servers before, this wasn't too daunting. It was about this time that I decided to see what other cloud compute hosts there were. Turns out, Google offers a service very similar to Amazon.

Google Cloud Platform
Google is much newer than Amazon in the cloud computing space, but has a very refined service that includes cloud computing (GCE), storage, and other similar services. I found it easier to dive in to than Amazon, and their compute pricing was slightly better.

Final Alternative
In the end I decided to use Google Compute Engine for my web host, and Amazon S3 for my scalable storage needs (Amazon S3 being slightly less-expensive than Google Storage). This approach is not for everyone though. You have to be comfortable using Linux, setting up DNS, and configuring files and permissions manually. There's plenty of documentation and a free 60-day trial though, so why not try it?
Share This Post
Twitter
What To Read Next

Add a Comment
Peter Warlock   Dec 19, 2022
I've been trying to reset my password. I get the message that I have to answer the security question, but it doesn't say what the question is! I've been guessing, to no avail. They do not respond to my online messages, and there is no chatbot help. I'm going to lose my site and my domain.
Rob Falk   Sep 17, 2019
Same email problem. They claim to be working on it. They’re a bunch of bozos. I’m looking for inexpensive host and email solution.
SrM   Aug 28, 2019
I cannot email any of my clients who use @yahoo.com or @yahoo.ca for over 40 days. and they tell me it is fixed Run away as far as you can EGI only care about $$ the benjamins to service their debt load payments. And they will ding yor CC continiously even when you cancel and migrate to another service
Share This Post
Twitter
What To Read Next
H3XED © Nick Vogt   RSS   Policies   Twitter