Jan 26, 2012   PC Gaming   Nick Vogt   Comments (1)
Please note that this post is over a year old and may contain outdated information. 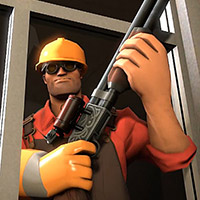 These tips are focused on public-server players. To play an offensive mini-sentry engineer effectively, you must ignore conventional wisdom. The mini-sentry is not an area denial weapon like a level 3 sentry, and you should not sit behind it or bother wrenching on it (it's non-repairable). You must be aggressive and clever in your mini-sentry placement and in how you engage enemies with your shotgun.

The engineer is often viewed as a poor class to have in combat due to his low health and only having a shotgun. In reality, the engineer's shotgun, which is the same as the pyro's, heavy's, and soldier's, is very damaging up close and still effective at medium range. Add in the Gunslinger, which buffs health to 150, and the engineer is fairly robust in combat on his own.

Just like a scout, you should use surprise to get close to the enemy and take them out quickly. When facing them head on, keep your distance and use the shotgun to whittle them down until they are distracted or you can flank them. Avoid direct confrontations with soldiers especially. Since you lack the mobility of the scout, you will be unable to avoid rocket damage.

If surprise is not an option, the engineer can go toe to toe with most classes, especially since many players won't view you as a big threat (a fatal mistake). On his own, the engineer is a decent combat class. Add in a smartly-positioned mini-sentry, and you'll make other players rage.

The mini-sentry is a weak sentry gun that builds very quickly. It can be taken out by most classes without too much trouble, so you need to rely on surprise and distraction to be effective. You can play an offensive engineer with the regular sentry, but it takes away a lot of your mobility and you'll have a harder time cashing in on your revenge crits.

Placement of the mini-sentry is key. You don't want distant players to have a line of sight on it, as it will go down quick (even to pistol fire). Keep it around a corner or just inside a passage/doorway. You want to take enemies by surprise with it. Put it up against walls so that it faces your team's side of the level. That way enemies will run past it and start taking damage before they notice.

Inevitably your mini-sentry will be destroyed, regardless of how good its positioning is. Any class can take it out if they know where it is, so you should immediately rebuild it in another spot. Hopefully it managed a couple kills or assists before going down, giving you revenge crits. This also leaves the enemy with a false sense of security, as you can rebuild another sentry within seconds around the next corner.

Since the mini-sentry builds so quickly, you should not be concerned about losing it. Do not sacrifice yourself to save it. If it gets sapped, focus on taking out the spy with a few well-placed shotgun blasts. You can remove the sapper but it generally isn't that important, since you can't repair it anyway. If your mini-sentry has a couple kills or assists and there is a lull in the fighting, do not be afraid to demolish it and rebuild it so you can gain the revenge crits.

How aggressively you place your mini-sentry will be a matter of taste. The closer to the enemy's side of the level you place it, the more by surprise you can take the enemy, but the quicker it will get destroyed. Placing it near the center will give you a lot of assists as it supports your team (my preference) and won't be an vulnerable. Putting it on your side of the level can pick off those pesky scouts, but it won't get as many kills.

Engage enemies at the same time that they start taking fire from the mini-sentry. This confuses many players and they will waste precious milliseconds deciding which target to attack first. Keep your distance from the mini-sentry though, to make it harder for your opponent to choose a target and to deny splash damage on both of you.

A smart player will try to pull you away from your sentry so they can deal with you one at a time. It's up to you if you want to pursue them or not. If they've been weakened by the combined fire of you and your mini-sentry, you can usually pick them off with some shotgun blasts up close.

If an enemy is chasing or engaging you and you are at a disadvantage, quickly throw down a mini-sentry (if you don't have one built already). Fairly often, players will focus on taking down the mini-sentry before continuing to attack you. This can give you a chance to escape or get off a number of shots on them while they are distracted.

Note that good players will generally ignore the sentry if they feel they can kill you in the next shot or two. Never turn tail and run. Always back-step and keep firing.

While you have revenge crits built up, your Frontier Justice will glow. This makes all nearby players distinctly aware that you are ready to deal out some major damage. Because of this, you can expect enemy players to target you in group battles, and also some players will flee when confronting you 1 on 1, or may try to kite you. You will also be a big target for enemy spies.

Whether or not you should build teleporters and dispensers for your team is based on the size of the level and if there are other engineers that have it covered. If you are the only engineer and it is a large level, you will get pressure to build them, and they do help your team quite a lot. If I am the only engineer on a team, I generally throw down a conservatively-placed teleport and dispenser, and then go about my business. If it is a large level, I'll upgrade the teleport to level 2 or 3. If we're holding a position I'll build a dispenser there and upgrade it.

The problem with dispensers is that they heal very slowly at level 1. If you leave it at level 1, you'll find public players often chill by it, waiting for it to heal them to full health. A few low health players crowded around a dispenser makes for a nice juicy target for a soldier. Upgraded to level 3, and the dispenser heals twice as fast (20 health/second instead of 10) and will get your players back into the battle much quicker.
Share This Post
Twitter
What To Read Next

Add a Comment
Forrest Zhang   Oct 08, 2012
Deep water is a great place for mini sentries. Tell a pyro to set people on fire before hand, and watch as the your sentry shoots them to bits. (The sewer at 2fort is a great place, blow up ur sentry once in while to get your crits.)
Share This Post
Twitter
What To Read Next
H3XED © Nick Vogt   RSS   Policies   Twitter