Dec 3, 2011   PC Gaming   Nick Vogt   Comments
Please note that this post is over a year old and may contain outdated information. 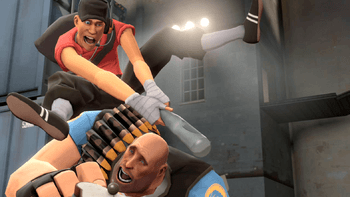 These tips are focused on public-server players. The key to a successful scout here is to avoid damage, flank opponents to take advantage of lax teamwork, and not get caught in an awkward position.

Most public players prefer a direct engagement and are not good at holding back. Scouts should avoid direct engagement, employ hit and run tactics, and not be overly concerned with getting a kill right at that moment.

The strength of a scout comes from weakening players, confusing them, and picking off stragglers. Medic kills are also vitally important and one of the key areas where scouts can really turn the tide (more on that later).

As a scout, you have to get into the head of your opponent and never engage them directly. Being too headstrong will be suicide in most cases. Hit and run tactics are the key to surviving and eventually getting kills, so keep your distance if the enemy knows you're there. Your scattergun may be useless at distance, but don't be afraid to switch to your pistol and shoot a few rounds into them.

Employ feign-attacks to confuse your enemy and make them think you're going to attack them directly. This works well when your opponent spots you at a distance and there is a corridor or room nearby with a path to your opponent. Duck in briefly to make them think you're going to try and flank them, then pull back and approach from a different angle.

If you are having trouble getting kills, it's probably because you're trying too hard to get direct frontal kills like a soldier or heavy.

Go for the medic

Just like a spy, a scout's prime target should be the medic. Medics usually hang back a few feet from the pack as to not take frontal damage. This leaves them very open to a flank attack. Unlike a spy though, a scout may not be able to kill them before they can move or react. Depending on the situation, you may want to pull back after a couple shots.

If the medic switches to a weapon and fights back, try to lure him away from the group and finish him off. If you've got him to stop healing you've already done your job; getting the kill will be icing on the cake. If the medic instead moves in front of the group, it may be best to break off the attack and flank from another angle later. The last thing you want is the heavy to know you're there, as any good heavy with a good ping can mow you down in less than a couple seconds at close range.

Capturing points and moving the cart

Despite the scout's double capture speed, you shouldn't focus directly on capturing points or moving the cart. You are simply too weak and will die too readily. In most cases a point or cart is being flooded with rockets and grenades continuously. Leave the brute force to the stronger classes with medic backup.

So you aren't going to be capturing the points directly, but that doesn't mean you can't assist. Go for a flank attack on the enemies that are providing suppressing fire on the point or cart. Chances are they will be preoccupied with shooting, and will be reloading fairly often. Use this perfect opportunity to approach them from the side and take them out with your primary at close range.

Due to the fast pace of the scout and having to get up close to do major damage, accurate aiming can be very difficult. If you have poor latency, you may find it nearly impossible to land hits up close, especially on moving targets. You can focus on taking your opponents by surprise, when they are less likely to be moving, but you should also practice your aiming.

The best way to practice aiming is to play the game (duh), but here are some hints that improve the effectiveness of your training: