Jun 10, 2010   PC Gaming   Nick Vogt   Comments
Please note that this post is over a year old and may contain outdated information.
This Runes of Magic guide is designed to explain transmutation to beginners and show you how to create some basic equipment. Transmutation allows you to imbue a piece of equipment with stats and increase its tier level (each increase in tier level increases defense or damage). It is the key to creating good equipment. It's also confusing for many players, and I think that confusion stems from a lack of good documentation for it.

To use the arcane transmutor you need to be level 10 and have finished the related quest in the class hall of Varanas. Using the arcane transmutor, you can combine a fusion stone with a piece of equipment to create a mana stone. The mana stone will inherit the tier level of the equipment and all the named stats of both the equipment and fusion stone (up to a total of 6 named stats). See this example: 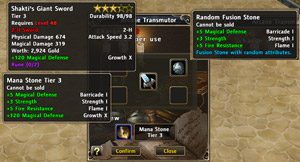 You should understand the difference between a stat and a named stat. A named stat is something like Barricade I or Strength I. These named stats provide the stats +5 Magical Defense and +3 Strength respectively. Named stats can sometimes provide more than a single stat, such as in the case of yellow or orange named stats. But for now we will stick to single-stat (green) named stats as they are easier to find.

Fusion stones can be purchased from Spirit Mages such as the one in Varanas West or in Obsidian Stronghold, or from the Auction House.

See this example for a dagger I made. Notice that I used identical low level named stats. The reason for this was because stats do not stack. 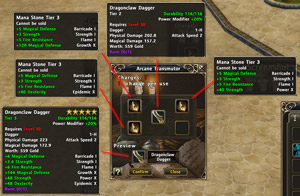 You can see that I had Barricade I, Strength I, and Flame I on all three mana stones. Each named stat is only used once on the final item. The three fusion stones that I originally found had identical stats, so I could have the three high level stats (Growth X, Power X, and Epidemic X) on the final piece of equipment. Had I had 3 mana stones that had various random level I named stats, they would have knocked off my X level stats. To find identical fusion stones I used the Auction House.

Now you may wonder how I got pieces of equipment with X level named stats on them. It is fairly easy using the Auction House. You will want to get the Advanced Auction House plug-in first. Then search for level 40 and higher equipment (to see tier 3 equipment), and filter the list to only show "IX", " X", or "XI" equipment. You should get a list of equipment that has those stats on them. Make sure they don't have any other, lower, named stats. I try to spend less than 20,000 gold per item. See this example: 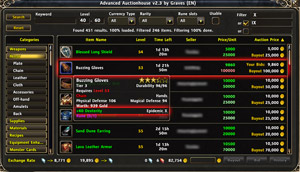 The process I've detailed above is what some people would call "Poor Man's transmutation". You can get some very nice equipment without spending a lot of time or resources, but it does limit you really to just three nice stats per item, and you're only tiering the equipment up to tier 3. The next level involves getting better fusion stones or purified fusion stones, and yellow named stat equipment. That won't be covered in this guide though.

One last note on transmutor charges. Each time you use the arcane transmutor, you will use a charge. You start with 10 charges when you receive the arcane transmutor, but to get more will cost you 30 Phirius Tokens each. That is a fairly steep cost, and I find it much easier to just level an alt to level 10 to get another 10 charges. The only issue is that you can't transfer bound equipment to and from your alts. That is why I stick to non-bound equipment when transmuting. I have timed it and can level a new Mage to level 10 and get the arcane transmutor in 40 minutes flat. I also will amass 90 Phirius tokens along the way to purchase 3 additional charges.
Share This Post
Twitter
What To Read Next