May 7, 2010   PC Gaming   Nick Vogt   Comments
Please note that this post is over a year old and may contain outdated information. 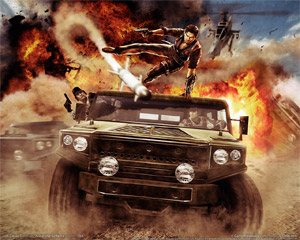 I am a die-hard PC gamer and love FPS and RTS games, and I am confident that those types of games are done best on PC. Naturally, I cringe at the idea of cross-platform games and ports, especially shooters of any kind. The porting process inevitably results in bugs, poor gameplay dynamics, goofy controller-centric menu systems, and poor visuals. Games that are designed for console simply don't translate well over to PC, as they were designed for the console's controller and limited console performance and resources. That being said, there is one game that I have had so much fun playing that I've managed to forget these issues, momentarily. That game is Just Cause 2.

This game doesn't hide its console roots, or really try to. It has bugs, crashes, glitches, and the controls don't feel very good on PC. The whole skydiving/parachuting aspect feels awkward on PC, and the vehicles are nearly impossible to drive accurately with the keyboard. But other than that, it is massively fun. The game world is enormous and extremely 3-dimensional. There is a serious feeling of smallness when the islands you're on really feel like volcanic islands, with towering mountains to climb. The topography is some of the best I've seen in an open-world game like this, though I found the weather transitions to be a bit abrupt (coming from the snowy peaks and driving down into the lowlands results in a very abrupt cut-off of snowy terrain).

My verdict on this game is that it is extremely fun, but can be frustrating at times. It fully lives up to its name, so don't expect a great story or plot. Just blowing stuff up and traveling the game world will give you plenty of game time. It is worth the buy, even on PC. There are some things I would like to see in the game, that would make it a lot more fun in my opinion:

1) The ability to enter buildings and explore them. As it is, most buildings are closed off brushes with only limited access, usually restricted to specific missions. Think of how fun it would be to parachute in and crash through the 30th floor window into one of the skyscrapers, causing all the office peons to run around as papers and office equipment goes flying.

2) More destructible environments. As it is, you can destroy crates, vehicles, and other certain objects, but the environment remains largely solid. It lends to a significantly disappointing feeling when you're tearing up an off-shore oil platform with missiles and all hell, only to see a couple of the fuel tanks explode, the tower fall over, and the oil platform to remain almost entirely untouched. I want to blow that thing up and send it sinking to the bottom of the ocean. On that note, why are there no sharks in this game (other than the fake one)?

3) The game wants to go into "skydiving mode" too readily, which can result in you flying off when you're just trying to jump from the roof of a building down to the next ledge. Skydiving also moves way too far horizontally at first and feels extremely unrealistic, especially when base jumping.