Mar 29, 2011   PC Gaming   Nick Vogt   Comments
Please note that this post is over a year old and may contain outdated information.

But can it play Crysis? Yes, yes it can. Crysis 2 is overall a more refined, playable, and consistent game than Crysis, and it should run smoothly on a larger number of systems thanks to a combination of less demanding visuals and better optimization for lower spec systems (IE: consoles). Don't let that deter you though, the game still looks great, though it certainly isn't the same Far Cry -> Crysis leap in visuals and physics that some were hoping for.

Crytek has made a lot of attempts to console PC players about Crysis 2 going cross-platform (see what I did there?), but make no mistake, there is indeed consolitis. The consolitis shows itself in the smaller size of levels, some buggy behavior, console-centric menu system, and less visual detail and physics than in Crysis.

Visuals aren't the end-all though, right? While Crysis 2 lacks details and physics, Crytek put a lot more effort into other areas this time around and it shows. The art style, plot progression, character interactions, and gameplay are all more refined and consistent. The amount of linearity and openness in levels is well-balanced and moves the game forward at a consistent pace that isn't quite as frantic as some Call of Duty games, but is still pretty quick. The linearity of the game will likely annoy some Crysis veterans, and may even cause some to not buy the game outright. I was split on it at first, but did end up enjoying the campaign a lot, even though it does away with most of the sandbox elements of the original. 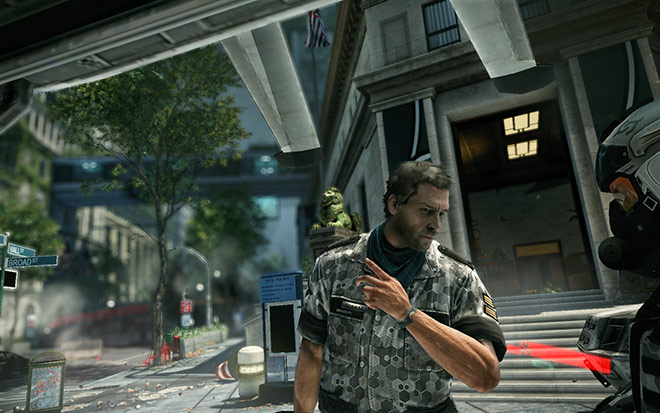 In the original Crysis and in Warhead, you were presented with levels that allowed you to take very large detours and approach areas from any direction. You could sprint for minutes straight and only cover a very small distance between two objectives. The enemy soldiers tended to be located throughout the level, with congregations near buildings and important points, but many wondering around on patrol. On some levels, such as the first level of Crysis, you could nearly forget about the mission at hand and end up just goofing off for hours.

In Crysis 2, you tend to go from one main engagement area to another in much smaller levels with minimal excess traveling. There isn't much in the way of timers, but you are still hurried through each level. The smaller levels cuts down on the range of different angles you can approach a situation from. The vertical aspect of some levels helps to add more depth to a confrontation, but they don't really make up for the sheer size of Crysis and Warhead levels.

In terms of gameplay hours, you will probably put double the hours into the Crysis 2 campaign as you did Crysis (assuming you actually played Crysis straight through without dilly dallying). There is a whole lot more content and there is a fairly consistent transition in level design. There are also more pseudo-control events and low-action cut scenes than in Crysis. Thankfully these don't take over the game like they do in interactive movies such as Call of Duty Black Ops.

I'm not going to get into the story of Crysis 2, because I don't want to ruin it. I will say that it takes inspiration from a lot of other games. It feels like Crysis mixed with modern military FPSs like CoD or BF:BC2, and it has a lot of different elements to it. It is far more in-depth than Crysis, and despite its fumbling at times there is a lot more to sink your teeth into. 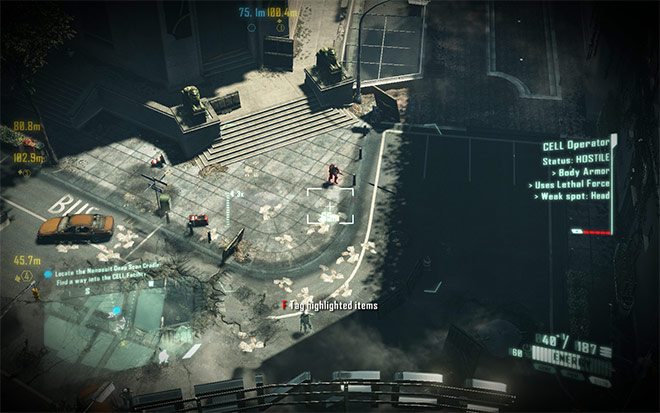 Now I have a short list of gripes about Crysis 2 that I would like to elaborate on:

The splash screen. Why is there a splash screen when you start up the game? It's just one more redundant, useless screen that you have to press a button to bypass. And on that note, the PC demo had "Press Start" to continue on the splash screen prior to the demo patch. Fixed in the full version, but not the best first impression.

The menu. It moves around as you move the mouse, making it difficult to click on things. For a console using a joystick, it isn't an issue, but with a PC mouse you tend to find what you want to click on and then make a quick movement to it. With the moving screen, the button will actually be in a different spot by the time your mouse cursor lands there a fraction of a second later.

No saving, only checkpoints. It can be aggravating to play through large sections multiple times. Perhaps the most annoying part is that you can't just quit the game when you want. Testing different graphics settings at a certain part of a level is much more difficult as well.

Enemy AI bugs. The AI has been improved in a lot of ways, and can be genuinely challenging; however, there are more than a few bugs. Occasionally, a soldier will stand around doing nothing, even when shooting at or near him. At one point, an enemy solder was sitting in a vehicle while I ran around outside, shooting at him (unable to kill him despite the open window).

Aim delay. When you right-click to aim or stop aiming, there is a brief delay before anything happens. This is more noticeable when unaiming. Controls overall can at times be less than responsive as well, such as when bringing up the weapon modification menu or switching weapons. Crysis and Crysis: Warhead did not have these problems, at least to this degree.

Lean over system. A very cool attempt to do a "take cover" system, but it can be buggy and annoying at times. When next to an object, you can often right-click aim to go into a crouched, cover system, where you look just barely over the top or to the side of an object. How far you are exposed is based on how far in you want to aim, which is cool. If there is any foliage on that object though, forget it. And it can make trying to normal aim difficult when next to an object. It also seems to be rather picky with exactly what objects you can do this with. The PC version of the game could have done better without this feature, which brings me to my next gripe...

No lean or prone. The cover system mentioned above is no replacement for lean or prone ability. This is a sad omission from the game and there is no excuse for it. :-[ 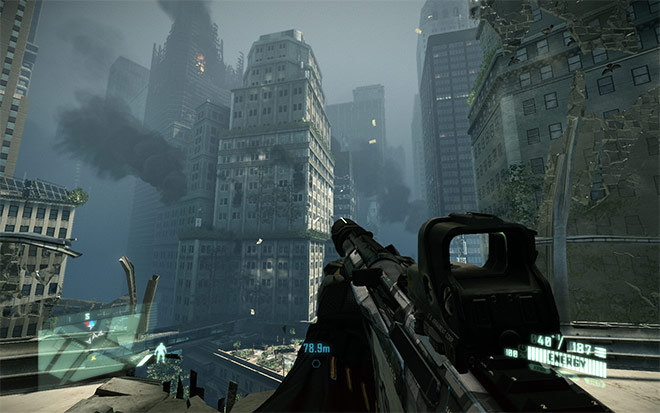 So far Crytek has shown a commitment to patching Crysis 2 on PC to fix the issues that the community is complaining about. The day 1 patch fixed some MP issues and got rid of the idiotic default-enabled aim assist. This is a positive sign, though it does serve to emphasize the observation that Crysis 2 for PC was rushed out. Nowhere is this more obvious than the post-release DX11 patch.

My final opinion of Crysis 2 is still quite positive, despite my gripes. I had a lot of fun playing it. The environments were very impressive and the linearity of it takes you through an interesting story that is pretty long. The downsides of the cross-platform nature are apparent in the bugs and small levels, but the effort put into other areas really sets it apart from the original Crysis. I haven't played the multiplayer yet (other than the demo), but if it turns out to be good then this will be a very solid game for Crytek, even though they've slightly forsaken the PC market in making it.