May 10, 2011   PC Gaming   Nick Vogt   Comments (2)
Please note that this post is over a year old and may contain outdated information. 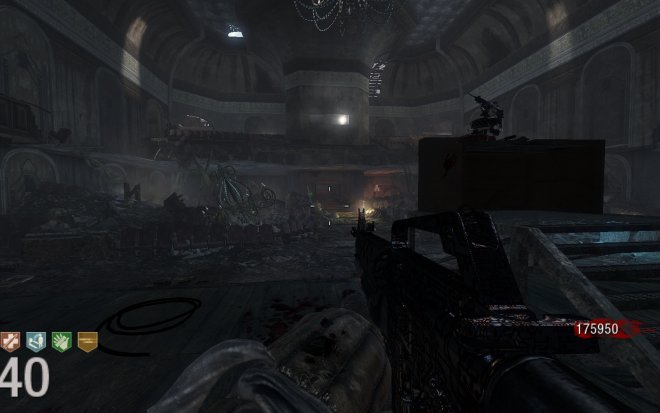 By following this guide, you will be able to survive nearly indefinitely on the "Kino der Toten" zombie level in Call of Duty Black Ops. It may take a few tries to get through the early part of the game, but once you make it through round 15 it will be smooth sailing, until you die out of boredom or simply quit.

This guide is focused on PC players, but should work fine on console. The main advantage of the PC is the ability to aim quicker and more precisely, as well as the ability to increase the field of view.

- Bullets that pierce and hit multiple zombies gain 10 points per zombie they hit.
- Thrown grenades gain points from hitting zombies, as well as points from the explosion.
- Killing a zombie with a head shot from a gun gets 100 points.
- Killing a zombie with the knife gets 130 points.
- Zombies that are killed while outside of the level do not drop anything.
- Hell hounds come every 4-6 rounds, and the last one always drops a max ammo.
- Only 50 zombies can be spawned at any given time.
- Only 2 hell hounds can be spawned at any given time.
- Quick revive on solo revives you automatically if you die. You can only purchase it 3 times.

My guide assumes you are familiar with the game already and know the door locations. If you do not, check out some of the maps available online.

As the game starts, allow all of the zombies to tear down the barricades and enter the room. You want to kill the zombies while inside to increase the chances of a drop. Shoot each zombie 4 times in the mid section, then knife them for the kill. This gains you the max points per zombie kill. Board up windows to gain a few extra points each round or to control the flow of zombies, but it generally isn't important.

On round 2, allow zombies to enter as before. This time, shoot them 6 to 7 times in the mid section, followed by a knife. You'll probably run out of pistol ammo after a couple zombies, so grab the M14 from the top of the stairs. If you lucked out and got a max ammo, continue to use the pistol. Either way, focus on getting as many points per kill as you can, and striking the final blow with either the knife or a head shot.

On round 3, continue to focus on points-per-kill, but be mindful as zombies will start pouring in faster. Only go for a knife kill if you're not in immediate danger. You may want to switch to one or two shots in the mid section, followed by a head shot, which will be safer than knifing.

During round 4 and 5, stay in the first room until you start to get overwhelmed (usually during round 4). Be sure to keep your pathway to the upstairs door open, and slowly fall back to it. After opening that door, head down the hallway and into the square room, then open the next door and go down the stairs. Once at the base of the rounded stairs, grab the MP40. With the MP40, you should be able to hold the zombies back much easier. If you become overwhelmed, open up the next door and slowly fall back, continuing towards the stage.

When the hell hounds come, circle side-step around them while shooting from the hip, as they won't be able to hit you this way. Fight them in an open area.

At this point, you want to keep moving towards the stage. At the end of the round you're currently in, which is hopefully round 5 or 6, do not kill the last couple zombies. Instead, move through the next door or two to get to the stage, if you aren't there already. Hit the power switch at the far end of the stage, and then step into the teleporter to start the link process.

Next, proceed through the center of the auditorium, grabbing the Juggernog on the way, which is just to the right of the door that leads back to the start area. Continue through the door and into the start area to finish the link to the teleporter (at the middle of the downstairs area). Pick up a quick revive while in this room as well.

With the teleporter linked and an MP40 in hand, head back to the stage and finish off any remaining zombies to end the round.

This is the hardest part and where you are most likely to die. You have to be quick and dexterous to dodge the zombies until you get a thundergun.

With each wave of zombies, start on the stage or very near that area. Pick off some of the first zombies that approach, then begin to do clockwise laps of the stage. Make your laps as wide as possible. Your goal is to get a zombie train behind you and not to get pinned by any zombies that spawn ahead of you. To do this, keep most of your attention forward as you make laps. Anticipate any zombies that approach and use your sprint wisely and sparingly. Don't be afraid to duck through the center part of the stage if you need to, or even to make a full level lap. If your path looks like it may get blocked, jump into the teleporter as a last resort.

Replenish your ammo as needed. By round 10 or so, I switch to the M16. The M16 bullets pierce zombies and can get multiple hits per bullet. When the zombie train behind you starts to get large, the M16 will become a gold mine, and you will be passing the ammo to replenish it during your laps.

At the end of round 15, leave one or two zombies alive and then go find the mystery box. You may have to open some additional doors to get to it, but be sure not to open the door that is at the west end of the stage. Your goal is the thundergun and only the thundergun. You should have enough points to make numerous attempts at it. The reason to wait until level 15 is that higher levels improves your chances of a better weapon.

If you don't get the thundergun and you use up all your points (be sure to save some for M16 ammo), then you'll have to keep doing laps as normal. At the end of each round, hit up the box for the thundergun and keep trying at it.

With the thundergun and M16, continue to circle the stage in a clockwise fashion. Keep the thundergun out and only use it if there are zombies that threaten to pin you. Once you have a train going and no more are spawning, use the M16 to whittle the group down, gaining lots of points, and just keep at it. After you've killed some, more will spawn, so be careful to not get pinned. Pull the thundergun out if a lot are spawning and keep your eyes forward most of the time.

The hell hounds that come should keep your thundergun replenished. Try not to use more than 2 or 3 shots per round and use them sparingly. You can upgrade both your weapons later on to get larger ammo reserves. The M16 ammo will cost 4500 points once upgraded, which will diminish your profit margin, but it will come with 9 shots with the grenade launcher that help to offset it. You will still be able to make a profit off the ammo if you aren't wasteful.

Well that's it really. You can go like this until you get bored or mess up. If you do mess up and get downed, you'll lose your perks. The most important perk is the juggernog. Use your thundergun to blast any zombies that are in your way, being careful not to let them get near you. Keep in mind it takes a few seconds to drink the perk cola, when you are defenseless. Use the thundergun to give you some room.
Share This Post
Twitter
What To Read Next

Add a Comment
Lance Gould   Apr 21, 2019
Some people make zombies seem so difficult but in all actuality, making it to round 40 is actually quite easy. This isn't a bad method. The M16 is a really good gun to hold onto. Also, the 4 round burst rifle is another popular choice. There are many great strategies to use to make it far and stack up points. I like the , if it moves , shoot it method :P
Marc Johnson   Oct 19, 2016
I havent tried this yet, but it sounds like the best method ive ever read... mine is almost the same, except for using the M16, and clockwise circles on stage so as the m16 ammo is on hand... normally i stick to thundergun and mp40 doing laps on the entire level (spawn point to upstairs to dressing room to stage and reapeat)... but ur method makes sense, as i never knew that the m16 had great penetration cheers!
Share This Post
Twitter
What To Read Next
H3XED © Nick Vogt   RSS   Policies   Twitter