May 19, 2017   Computer Hardware   Nick Vogt   Comments
Please note that this post is over a year old and may contain outdated information.
Here are my picks for the best solid state drives for May 2017. This list is divided into three different size classes (small, medium, and large).

Small SSDs are most often used as the boot and application drive of a system, with a secondary hard disk drive storing games and media. If you're not a big gamer and don't store much media on your PC, you can also get away with this size being your only drive. 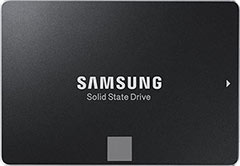 The Samsung EVO series has been one of the best bang-for-the-buck solid state drives for some time now, and the 850 EVO 250GB is no exception. It is economically-priced and near the top in terms of real-world performance (3rd place among drives tested at UserBenchmark). It's not quite as fast as the Samsung 850 Pro, but its much lower price makes it a better choice in this size class, which tends to skew towards budget-minded consumers. I personally use this drive in two PCs and a laptop. 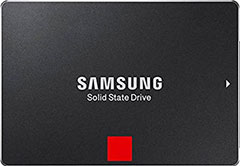 The Samsung 850 Pro 256GB is the fastest in real-world testing on UserBenchmark. It is also 6GB larger in capacity than the Samsung 850 EVO. However, its 40% higher price makes it not quite as attractive of an option in this small size class. It mostly excels over the EVO in write performance, but with such a small drive you probably won't be doing heavy write operations (like media encoding or screen recording).

Medium SSDs are large enough to be the only drive used in most PCs. They're still a bit small if you're storing lots of media, doing video production, or want to have more than a few of the latest games installed at a time (Doom is 80GB alone!).

Just like with the small size class, the Samsung EVO provides the best bang-for-the-buck in the medium size class, with one caveat: If you do a lot of write-heavy operations on your computer, like screen recording or media encoding, then you may want to consider the 850 Pro instead (see below).

The Samsung 850 Pro 512GB is the fastest in real-world testing on UserBenchmark. It is about 40% more expensive than the EVO though, with very similar read performance. If you do any sort of time-sensitive write operations, such as screen recording while streaming, then it may be worth it to get this over the EVO.

Large SSDs are excellent when you want to do just about anything without needing a secondary traditional drive. Perfect for media production machines and high-powered gaming rigs.

Unlike the smaller size classes where the 850 Pro is 40% more expensive than the EVO, in the large class it is only 30% more expensive. It is also the fastest overall solid state drive in real-world testing on UserBenchmark. That combined with the more power-user nature of needing a large SSD makes it the first choice in this size class.

The Samsung 850 EVO 1TB is still a solid choice in the large size class. Just like the other sizes, it lacks write speed compared to the 850 Pro, but is otherwise very close in performance. This is a great choice if you need a lot of fast storage space, but aren't doing a lot of write-intensive operations. For example in a high-end gaming rig that needs hundreds of GB for game storage, but is still doing mostly read operations.
Share This Post
Twitter
What To Read Next