8 Reasons why I prefer Firefox over Chrome

Jan 6, 2012   Web and Internet   Nick Vogt   Comments
Please note that this post is over a year old and may contain outdated information.

Chrome has been making major inroads into the browser market share of both Internet Explorer and Mozilla Firefox. It is now close to tied with Firefox and the trend favors Chrome. This is probably due in large part to Google leveraging its marketing power to push Chrome. The new Chromebooks will certainly help push the name recognition further.

I use both browsers regularly (8+ hours a day, side-by-side on dual monitors) and after a couple years I still find myself using Firefox first. I figured I would try and compile a list of the reasons why I prefer Firefox. This comparison is done for Chrome version 16 and Firefox version 9. Now that the "Version War" is on in full force, both Chrome and Firefox may be a much higher version by the time you read this, so specific features covered below may change.

Furthermore, if Chrome's omnibox comes up with a suggestion for the address you're typing in, Ctrl-Enter will act as a normal Enter and go to the suggestion. For example, if you type in firefox and firefox.net comes up as a suggestion, pressing Ctrl-Enter will take you to firefox.net, and not firefox.com. To get around this, you have to first hit Backspace/Delete to remove the suggestion, then press Ctrl-Enter to append .com. It does this for subdomains as well. I had ftp.adobe.com in my recent history, and after typing in "adobe" followed by Ctrl-Enter, which should take me to www.adobe.com, I was taken instead to ftp.adobe.com.

I covered this in my post about Chrome search & virtualhosts conflicts. In short, because the omnibox is both the address bar and search box, Chrome has to do guess work to determine if you are entering an address or a search query. When dealing with local hosts and web development, it often guesses wrong.

I prefer the separate address bar and search in Firefox. Not just for the elimination of any ambiguity as mentioned above, but also because I often use the search box to temporarily store data that is used between different tabs. I will also sometimes compile a complex search query from multiple tabs, or a search query that uses part of a URL from the address bar. This is simply much easier to do in Firefox. Having the two separate bars isn't an issue for any decently-sized monitor.

On a related topic, if you type in an address and hit enter, but press Escape before the page starts to load, Firefox will retain the information that you had typed into the address bar, while Chrome (like IE) will remove it. Sometimes you make a mistake in the URL when typing it in. In Firefox, you can easily and quickly use Escape to stop the loading, without having anything erased from the address bar.

Chrome's layout is uncluttered and minimalistic, which is great. Firefox's default layout, which is very similar to Chrome's, takes up less space and gives you the full width of the browser for tabs (Chrome's tabs butt up against the minimize/maximize/exit buttons). The tabs in Firefox are also longer by default, showing more of the title.

If you're like me, you like having the traditional File/Edit/View/Etc menus. With Firefox, you can configure it to have these menus and still be just as compact. You'll also gain a full-width title bar. Another thing I like is the ability to remove the tab bar completely if there is only one tab open. View the comparison screenshots below: 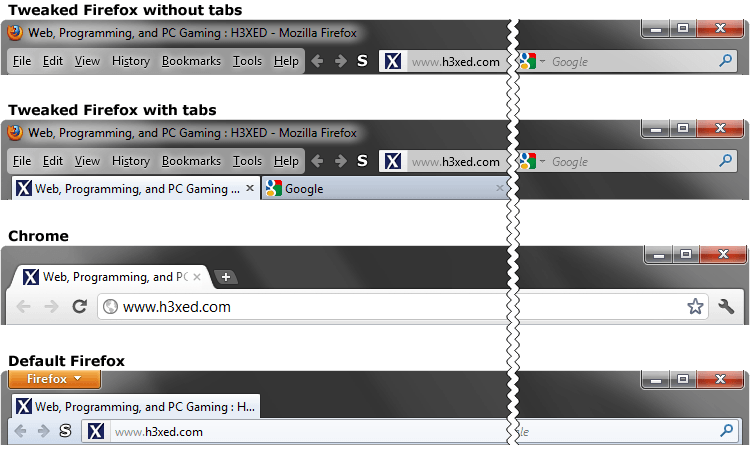 Chrome does get a bit better if you have the browser maximized, but that is really unnecessary for modern day monitors. On a laptop perhaps.

When a download starts in Chrome, a small tab is opened along the bottom of the browser window. This tab takes up browsing space for all the tabs in that window, and can only be dismissed by clicking a small X in the bottom right corner, which has no discernible "hover effect".

In Firefox, a small window is opened upon download, which can be dismissed by pressing Escape or Ctrl-J. It doesn't take up browsing space and can be minimized, which allows you to conveniently monitor download progress in the start bar. You can also close the main Firefox window and leave just the small download window running.

The progress bar of a download in Firefox is instantly recognizable compared to the progress "circle" in Chrome. In the Firefox download manager, a user can more quickly determine how far along a given download is, which downloads are complete versus not complete, and how much time is left.

The History tab in Firefox is more functional and less obtrusive than the History tab in Chrome. In Firefox, you can view the history while still viewing the page you're on. You can sort it by date, site, last visited, and most visited, and right-click directly on History entries to delete them, add them to bookmarks, or forget about the site (removes all history entries for that domain and corresponding settings). Chrome does do one thing better, which is that it shows the exact time you last visited the entry down to the minute.

As a side note, Firefox uses instant search to search the history, and it does instant search right. That is, you type and it waits until you've stopped before it does anything (or you can press Enter). As a brief aside, this "instant search" functionality is in contrast to the instant search www.google.com employs, which starts moving things and loading things immediately and constantly as you type, making it difficult to actually type in a query. At the time of writing, Google Chrome does not employ instant search for its history, which is somewhat surprising.

Firefox allows you to have a traditional Bookmarks menu, which if configured like I have in "4. Layout Configuration", doesn't take up any extra screen real-estate. Chrome's bookmark bar, with the ability to add folders, is functional and easy to use, but takes up more room.

Not much needs to be said here other than aboug:config. Countless features in Firefox can be tweaked, changed, or disabled. This is beyond the already greater level of configurability on the surface of Firefox.

If you want to get more out of your browser and want more control over its features and functionality, Firefox is the clear choice over Chrome. Chrome isn't a bad browser, and certainly performs just fine for basic web browsing needs.

Chrome has also pushed Firefox for the better. Without the competition that Chrome provides, Firefox wouldn't be as good as it is today. Certainly we can't rely on Internet Explorer to push the envelope.

In Chrome, I do like the ability to open up a separate private window while keeping the main window open, and this is functionality I hope Firefox adopts soon (I bet we see Firefox split different windows up into different processes before long).
Share This Post
Twitter
What To Read Next