Jun 17, 2011   Programming   Nick Vogt   Comments (3)
Please note that this post is over a year old and may contain outdated information.
Here's a quick description of a unit vector for those that don't know. A unit vector is a vector with a magnitude (distance) of 1. The vector can be pointing in any direction, but the magnitude will always be 1. To get a unit vector from any old vector, you "normalize" that vector, which gives you a new vector with the same direction but a magnitude of 1. Unit vector and normalized vector are often used interchangeably. 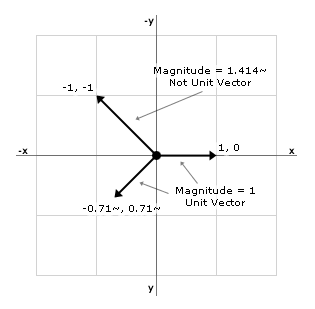 To get a unit vector, the easiest and most accurate way is to divide each part of the vector by the vector's magnitude (length). Here is an example:

// Use sine and cosine on the radians
x = sin(r)
y = cos(r)
Both code blocks above will give you the same unit vector.

In 2D gaming, you often use unit vectors along with multipliers to calculate a projectile's vector based on the speed you want it to travel at. Take a look at this example:

// Divide by magnitude and multiply by desired speed
x = x / m * s
y = y / m * s
The above will give you a vector from player to enemy that will travel 12 per iteration, regardless of the angle of the vector or how far away enemy was from player.

This is all fine and good, but the square root function and the two divisions can slow things down if you're using it a lot every frame (and the trigonometry version is slower yet). You probably don't need perfectly-accurate calculations for your game, so it is often better to use an approximation that is faster.

Here is an approximation that I came up with for the unit vector:

// Multiply by ratio
x = x * ratio
y = y * ratio
This is faster mainly because it doesn't use a square root function and only uses one division instead of 2. Ideally, I would like to get rid of the division, but I haven't figured out a way yet. Depending on your programming language, using conditionals in place of the abs and max functions will be faster.

Visually, this is what the equation would create if you used it with a speed of 150 and fired projectiles in every direction. The red circle is a "perfect" circle created with the regular (slow) sqrt equation. The black "circle" is created with the approximation. It isn't perfect, but it is close enough and is much faster:

Here is an example in ActionScript 3 (Flash) of a function that returns a normalized and speed-adjusted vector. "M" is the speed, which I add to the end of the ratio. Notice that I used condition checks instead of absolute value and max functions. Doing this is much faster in ActionScript 3. I also found that simple if/else statements were a little bit faster than using the ternary (short-hand) checks.

It is good to instantiate the variables that your function will use outside of the function, otherwise you will be instantiating them every time the function runs and it will slow down the function considerably.

Here is an example in an ActionScript 3 custom class:

Add a Comment
Eph   Feb 05, 2018
You can slightly improve the average error by multiplying ratio with 1.0/0.975 before multiplying it onto the coordinates. This will effectively enlarge the polygon in your drawing a bit, such that the difference of the length of the fast-normalized vector to 1 is (approximately) in the range [0.975, 1.025] instead of [0.95, 1]. It probably makes no difference in your game - all projectiles would be equally faster and / or slower, but if accuracy is important, it might make a difference.
OlvinJanoisin   Dec 15, 2017
Hi, here is one without division, you can omit the errorCorrection so then there will be only one multiplication on routine. inline double len(double x,double y) { const double errorCorrection=1/0.949; if (x<0) x=-x; if (y<0) y=-y; if (x<y) swap(x,y); if (x>y+y) return x*errorCorrection; return (x+y)*0.6666667*errorCorrection; }
Afifudin Mahdan   Feb 25, 2014
Cool, very detailed yet easy to understand explanation.
Share This Post
Twitter
What To Read Next
H3XED © Nick Vogt   RSS   Policies   Twitter